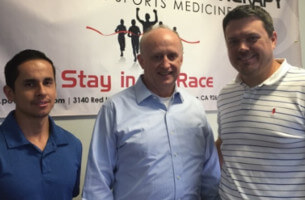 This was my fourth visit to Power PT. When I came in for the initial consultation for my ankle, Dr. Nowlin’s comment was, “Wow! I’ve never seen one that bad before!” Then again we were dealing with a severed ligament that was integral for support and stability. Dr. Nowlin also explained that due to the injury I had suffered nerve damage. He further stated I should have had surgery or at the minimum been in a walking cast. We were 40 years too late for that, so on to physical therapy. When I first started physical therapy for my ankle, I had pain with each step. If my foot touched the ground I was in pain. My podiatrist had given me a wonderful ankle brace and suggested ice and pain meds. That worked for a while but I eventually got the script for physical therapy.

One of the things you come to appreciate about Dr. Nowlin is his thorough understanding of your injury and his plan of attack towards healing the area. No hurry, no doing things that bring pain, and often the exercises he has you doing can be replicated at home for little or no cost. I continued my normal workout regimen of the elliptical and recumbent bike during physical therapy. After a couple of weeks, I was walking without pain again though I still had a little pain depending on the angle that my ankle was in. A few weeks later, that was gone.

Next up was to test the ankle with no brace for my normal workout. No pain. My final test was to further test the ankle by running on the treadmill for a short distance and ride my road bike for a few miles. Again, without the ankle brace to see how the joint responded. No pain, and I was released from physical therapy. I hope to continue my workout and add a little treadmill running, longer bike rides, and to try playing tennis as well. Great progress was had in a short period of time working with Dr. Nowlin and the staff at PowerPT.